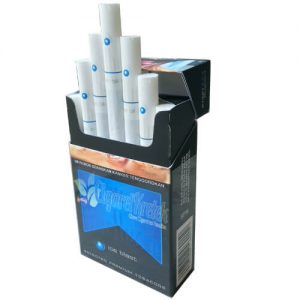 Marlboro Ice Blast, is a the most famous cigarettes around the world. We had this special products, made in Indonesia. Manufactured by Phillip Morris group at Karawang, Indonesia. The red and white package was designed by the Designer Frank Gianninoto. The repositioning of Marlboro as a men’s cigarette was handled by Chicago advertiser Leo Burnett. The proposed campaign was to present a lineup of manly figures: sea captains, weightlifters, war correspondents, construction workers, etc. The cowboy was to have been the first in this series. While Philip Morris was concerned about the campaign, they eventually gave the green light.

Within a year, Marlboro’s market share rose from less than one percent to the fourth best-selling brand. This convinced Philip Morris to drop the lineup of manly figures and stick with the cowboy, later known as the Marlboro man. From 1963 the television advertisements used Elmer Bernstein’s theme from The Magnificent Seven.

In order to comply with a 2006 court ruling in United States v. Philip Morris USA, Inc., et al.,[6] Philip Morris (and all other cigarette companies) is now prevented from using words such as “Lights”, “Ultra-Lights”, “Medium”, “Mild”, or any similar designation that yields a false impression that they are safer than regular full flavor cigarettes. Thus Marlboro Ice Blast and other cigarette companies must use only color-coding instead; for example Marlboro Lights are now called Marlboro Gold Pack.